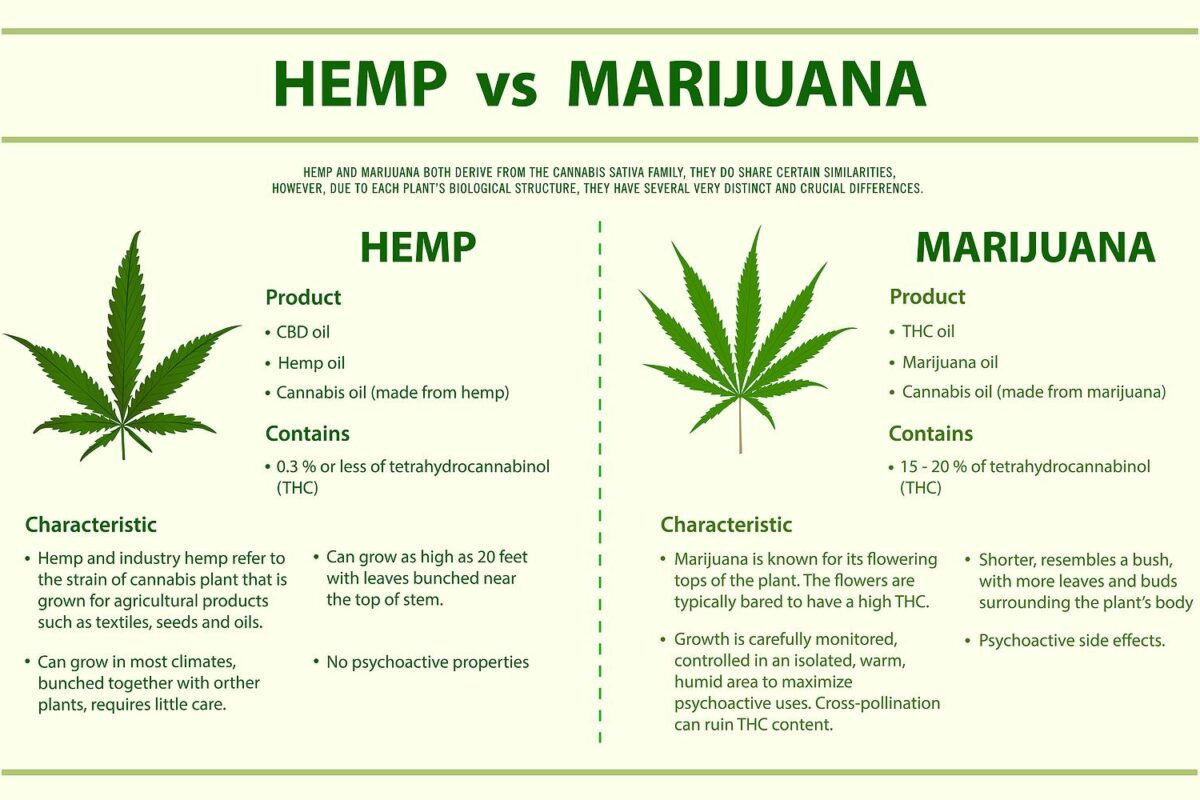 The Cannabis plant is a miraculous plant to examine! The cannabis has over 200 bioactive compounds that have been discovered. To examine the Cannabis plant as a whole, we have to start with the four main species: Cannabis Sativa, Cannabis Indica, Cannabis Ruderalis and Hybrid.

Think of these species as different types of onions or like cousins. We have yellow onions, sweet onions, red onions, scallions, etc. They come from the same species but produce a different product. It’s the same with the Cannabis plant, with Cannabis Sativa and Cannabis Indica being the two most common strains. Ruderalis is less common but often used by breeders to enhance their hybrid crops. The mixing of Cannabis Sativa and Cannabis Indica produces a Hybrid strain. It is most believed that Cannabis Sativa produces an energetic effect and Indica is more sedative or “in the couch” effect. The effects of hybrid strains maybe be unknown until consumed because breeders have cultivated so many.

What are the Different Species of Cannabis?

Cannabis Sativa have long light green leaves and grows up to 25ft tall. It is most commonly known as hem 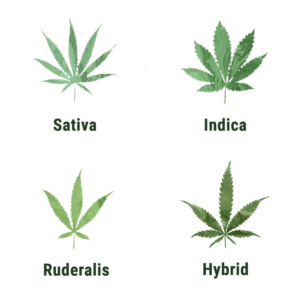 p which is grown for industrial use and government regulated to contain less than 0.3% of THC (the compound found in marijuana that produces a “high” or intoxication felling).

Cannabis Indica is a faster growing plant with fat, bushy, dark green leaves and grows up to 6ft tall.

Cannabis Ruderalis is a short and stocky plant with bright green leaves. Ruderalis is used for auto-flowering to produce a faster harvest.

Hybrids produce a variety of effects because of the mixing of Sativa and Indica strains which generally have different reactions. Growers continue to experiment cultivating different strains to produce different desired effects.

To make this easier to understand let’s quickly discuss the difference between Hemp and Marijuana!
Hemp, Marijuana and Cannabis are often used interchangeably. Both Hemp and Marijuana are Cannabis. Hemp is more commonly Cannabis Sativa strains and cultivated to contain less amounts of THC. Marijuana is generally more of the Cannabis Indica strain, although that is not always the case. Rather than saying marijuana or hemp we can just say Cannabis because they are both species of the Cannabis plant. However, if you are in the cannabis space in any aspect you definitely need to know the difference from a legality standpoint as outlined in the 2018 Farm Bill.

The government regulates the naming of cannabis. The only thing they are concerned about is the amount of THC content, which is the compound that produces intoxicating effects.

If Cannabis contains less than 0.3% THC it is considered Hemp.

If Cannabis contains more than 0.3% THC it is considered Marijuana. Marijuana typically contains 15% or more THC.

How is Cannabis used? 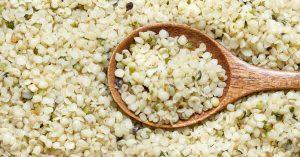 As we all know a plant starts with a seed, in this case, the Hemp Seed or Cannabis Seed. The seeds pictured have been hulled and removed from its outer casing. Hemp Seeds are completely legal. You can buy hemp seeds at grocery stores because it does not contain any cannabinoids. They will not produce any psychoactive or intoxicating effects. They are commonly used for cooking, salad toppers or any addition to a meal. Hemp Seeds can be pressed to make Hemp Seed Oil. They are not to be confused with CBD Oil. Hemp Seed Oil is strictly from the seeds of the Cannabis plant which does not contain any cannabinoids.

Next up is the Cannabis buds or flowers, which is the greatest interest of cultivators because it contains the highest concentration of cannabinoids in the entire plant. It is important to know that it’s the female Cannabis plant that produces these highly concentrated buds t 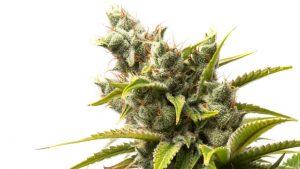 hat are most favored among Cannabis consumers and Cannabis culinary consumers.

This is a picture of a raw Cannabis bud; you will usually see it dried. Cultivators will harvest this bud from the plant, cut off the small leaves and dry it into the Cannabis buds that we consume. The dried buds are then used for recreational and medicinal purposes. Raw Cannabis does not contain high amounts of CBD or THC, instead it contains the acidic form of cannabinoids CBDA and THCA. We will dive more into these acidic varieties later. 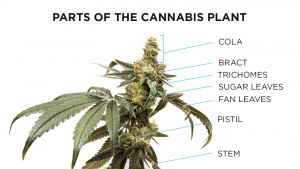 Unless you are a grower, you will usually not have access to a raw Cannabis plant to be able to see these details up close. This is the flower of a female Cannabis plant. It is usually identified by its pistils which are small tear drop leaves attached to the bract. The bract are small leaves that surround the reproductive cells of the female plant. When a male plant exposes the female plant to pollen the bract surrounds and protects the seed pod.

The Cannabis flower is covered in trichomes, the frosty hair-like appendages found on the surface of the plant. These hair-like appendages protect the plant from external stressors and contain glands that create flavonoids, cannabinoids and terpenes. It also gives the plant a sticky feeling from its frosty crystals. The heavier the density of the trichomes makes a more desirable flower!

The cola is the small flora cluster at the top of the plant. The blooms of the plant are formed in the cola.

The female Cannabis plant has two different types of leaves: sugar leaves and fan leaves. Sugar leaves are really tiny leaves found throughout the cola buds and are trimmed down by cultivators after harvest. However, since they are so close to the cola and contain high amounts of trichomes they produce more cannabinoids like the cola bud.

Fan leaves are much bigger but don’t have as much trichomes or cannabinoids as sugar leaves. Raw cannabis leaves are used for juicing and salads. Some say they are the most nutrient-dense foods today. Fan leaves contain nine essential amino acids, essential fatty acids, enzymes, vitamins, minerals, carotenoids, flavonoids, terpenes, nutritional fiber and phytocannabinoid acids. Which have all been studied to have potential health benefits.

The Cannabis stalks and stems are not used for recreational or medicinal purposes. Some have saved them to make teas, however, they contain very little cannabinoids. The fibers on the outside of the stalk are used to make everything from fabrics and clothing to ropes and paper. The inside of the stalk has been used to make compost, paper, bedding and much more.

We do not have much information about the medicinal purposes of the Cannabis roots. Although it was prepared and used as a

topical remedy to treat infections, fever, arthritis, gout and joint pain thousands of years ago. We need more research to understand why the Cannabis root is beneficial as it does not contain cannabinoids or trichomes.

The Cannabis plant is quickly growing in popularity. I want to be sure you are well informed and practicing safe Cannabis consumption now that you know about the different parts of the Cannabis plant!

Next, we will discuss the most common cannabinoids and their potential benefits.
We sincerely hope you enjoyed this article.

To show you how much we appreciate you, we are going to give you 15% off your next order.

Simply use code READER15 at checkout!